There can’t be too many publishing houses producing brand new Latin editions of works from the eighteenth century, nor bookshops selling them, but the Swedenborg Society proudly does both! As a publisher and bookseller specializing in Swedenborg for over 200 years, one might expect everything in Swedenborg’s back catalogue to have been exhausted many times over, but there are still manuscripts of his that have never before been translated—we still await a translation of the brilliantly titled (but ultimately quite sober and technical) 1724 work De Victriolo, or On Vitriol—and others that have never been published outside of rare facsimile reproductions of the manuscript codices themselves. Swedenborg’s autograph indexes to his Arcana Coelestia were just such a proposition until John Elliott transcribed and edited them in 2004.

We are probably the only bookshop that has stocked and sold copies of this work, but they have been welcomed by those editors and translators of Swedenborg who have got their hands on them. John Elliott’s work on the ARCANA COELESTIA INDEXES has in fact been a springboard for a whole new raft of Latin editions and dual language Latin-English editions of Swedenborg, who would include hundreds of references to the Arcana (published in 8 volumes in Latin in 1749-56) in nearly all of his subsequently published books. The publication of the ARCANA COELESTIA INDEXES has allowed John (and other editors and translators) to amend many of the misprinted numerical references to sections of the Arcana that appear in footnotes, and sometimes in self-contained ‘chapters’ (or ‘inter-chapters’) several pages in length, in works such as Heaven and Hell and The New Jerusalem.

The ARCANA COELESTIA INDEXES is a specialist book in a niche field of publishing, but it helps shed lights on Swedenborg’s compositional methods and one can argue that it was, for Swedenborg himself, the manuscript of most importance, being, as his friend and neighbour Carl Robsahm testified, one of the only books he kept in his bedroom at his home in Stockholm ‘by which, in making quotations, he was saved the trouble of examining all that he had previously written’. 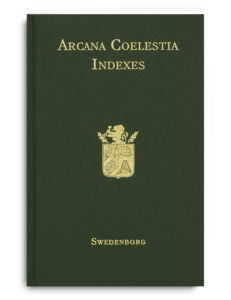