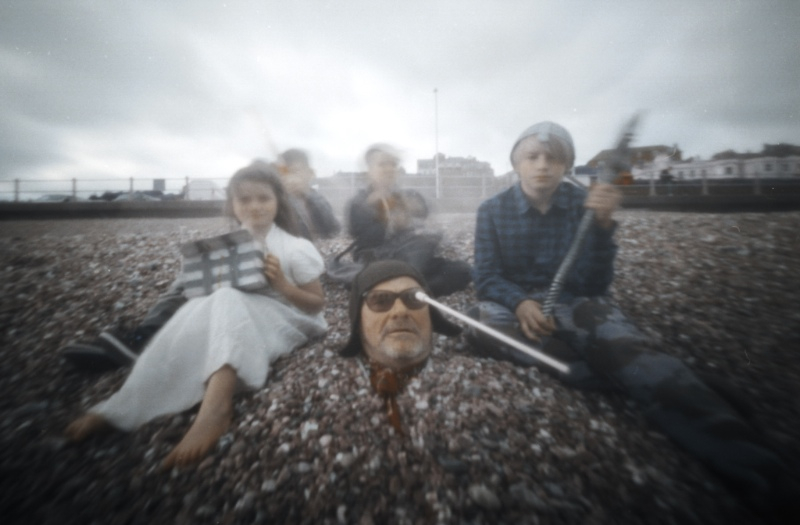 Showcasing new works by artist filmmakers, the SFF returns on 26 November with an exciting and topographical-themed programme:

At the close of the evening, SFF guest judge—filmmaker Andrew Kötting—will announce the winning film and the 2017 call for entries.

The SFF has received a huge response from thousands of filmmakers around the world since its launch in 2010, with its selected programme of short works exploring the singular legacy of the Swedish philosopher, scientist and mystic Emanuel Swedenborg (1688-1772), a seminal influence on Romantic, Symbolist and Surrealist traditions, and in particular the great English artist William Blake. The SFF boasts a commitment to show the work of international filmmakers who are engaging with themes similar to those that energized Swedenborg. This year entrants have been invited to explore the concept of ‘topographies’—a notion encountered in the work of John Rogers, Iain Sinclair, Andrew Kötting and Emanuel Swedenborg.

ANDREW KÖTTING is an acclaimed artist, writer and filmmaker. Known for films such as Gallivant (1996), Ivul (2009) and Swandown (2012), his work explores and retraces journeys—many taken around the British countryside—where tradition, myth and memory overlap.

IAIN SINCLAIR is a writer, poet and filmmaker known as a chronicler and critic of ever-changing contemporary London. His works include Downriver (winner of the 1992 James Tait Black Memorial Prize), London Orbital, Hackney That Rose-Red Empire and Blake’s London.

JOHN ROGERS is a writer, filmmaker and author of This Other London—Adventures in the Overlooked City. His documentary films include London Overground and The London Perambulator. John is also a co-presenter of Ventures and Adventures in Topography on Resonance FM.

THE SWEDENBORG FILM FESTIVAL is curated by Gareth Evans, writer, presenter, producer (Patience: After Sebald; By Our Selves and Unseen) and Film Curator at the Whitechapel Gallery, London; and Nora Foster, Communications Manager, Frieze and formerly Assistant Curator, The Swedenborg Society.

Admission is free but capacity is limited. Book now at:

about the guest judge

ANDREW KÖTTING is one of Britain’s most intriguing artists, and perhaps the only filmmaker currently practising who could be said to have taken to heart the spirit of visionary curiosity and hybrid creativity exemplified by the late Derek Jarman. Formally exploratory and aesthetically innovative, like Jarman he is also a great collaborator, building around his various projects a community of shared interest, while anchoring his prolific production in an ongoing report on the lives of those closest to him.

His twenty-five-year oeuvre to date has moved from early live-art inflected, often absurdist pieces, ripe with their own internal logics and skewed mythologies, through darkly comic shorts teasing out the melancholy surrealism at the heart of contemporary Englishness to four resolutely independent features that take landscape (rare among contemporary artists, he is most engaged beyond the urban) and journeys as the springboards for visually striking and structurally inventive enquiries into identity, belonging, history and notions of community. Throughout his art works he has also written and performed, created for digital platforms and for the gallery (two- or three-dimensional pieces and installations) and is increasingly working directly with sound and music, in concert and on CD. Such activity reflects both his wide-ranging formal interests but also his refusal to adopt conventional ideas of closure around artworks in any medium. Ideas and images frequently migrate between media, being echoed and amplified in these translations. It is this openness, underpinned by an outlaw intelligence and pranksterish wit that marks out his work as both energising and important.

about the shortlisted filmmakers

ANGUS CARLYLE (b. 1968, Edinburgh; lives and works in Brighton and London) works between text, sound and collaborative projects that involve moving images. In The Shadow of the Silent Mountain (2016) is his last field recording project and A Downlands Index (2016) his first solo book, an exercise in nature writing on the move. His installation A Crossing Bell was part of the Estuary Festival 2016. He lives in Brighton and works at the University of the Arts in London, where he is Professor of Sound and Landscape.
Website: anguscarlyle.com / Instagram: @anguscarlyle

JACOB CARTWRIGHT & NICK JORDAN have been based in Manchester and collaborating since 2003. Their practice is cross-disciplinary, encompassing video, drawing, painting, photography, objects, publications and events. From invasive species and ancient oaks to ornithologist explorers and marginal communities, their work looks at the relationship between the natural world and our multifaceted cultural histories. Cartwright & Jordan’s work has been exhibited widely, including at ICA, London; Kunstmuseum, Bonn; Cornerhouse, Manchester; Academia de Cine, Madrid; Musée du Quai Branly, Paris; and Headlands Center for the Arts, San Francisco.
Website: nickjordan.info/wurstundgritz.html

CHIARA CATERINA (b. 1983, Salerno; lives and works between Italy, Belgium and France) is an independent filmmaker currently enrolled at Le Fresnoy – Studio National des Arts Contemporains in Lille, France. She makes films related to a personal sense of landscape and loves moving images in which fiction and reality meet, fabricating a brand new appearence of truth.
Website: www.chiaracaterina.com / Instagram: @chiara_catcat

HAROLD CHARRE (b. France, 1980) has been a jazz pianist for 15 years, following musical training at the conservatoire de Lyon and Paris. He studied Theology and rapidly turned to the self-taught making of films/videos and installations in which his passions for the moving image, music and the mysteries of mythology may express themselves.

KARIN GUNNARSSON (b. 1976, Sweden; lives and works in Barcelona) predominantly works in photography and artist film. She graduated with an MA in Photography from London’s Royal College of Art in 2009. Her graduation piece, Being It—in which she starred and performed as a Yeti-like character making traces through a snow-covered landscape—was a starting point of an artistic investigation into symmetries between psychological processes and the physical body, featuring ghosts, mythical beings and fantasy creatures. In films, photographs, texts, performances and installations, Karin Gunnarsson constructs narratives that reflect on manifestations of trauma and creative transformation.
Website: karingunnarsson.com / Instagram: @gunakau

BERND LÜTZELER (b. 1967, Düsseldorf; lives and works in Berlin) studied at University of the Arts Berlin. He is an active member of the artist-run, analogue film collective LaborBerlin. In his works he often focuses on the aesthetics and perception of the moving image and sound, and their interrelation with technology and society. Several of his film and video projects have been produced in Mumbai, India, including his film The Voice of God and the multimedia theatre performance K⁰.
Website: bernd-luetzeler.de

JAMES NORTON began his career as an assistant on films by Derek Jarman, Terence Davies and Sally Potter before researching and producing television arts documentaries for series such as Arena, Imagine and The South Bank Show. His short films on art and fashion have been shown at the V&A Museum, the Venice Biennale and the Centre Pompidou. He has cycled across Canada, and has swum the English Channel, Lakes Windermere and Zurich; and from Capri to Naples. Awards: Silver medallist, World Winter Swimming Championships, Siberia, 2016.
Website: jwnorton.co.uk / Twitter: @cineswimmer

MONIKA  OECHSLER (b. Munich; lives and works in London) is a senior lecturer at the University of the West of England, Bristol and at Chelsea College of Art and Design, London. She studied at Goldsmiths, University of London where she received an MFA in 1996 and was awarded a PhD in 2012 from the University of Brighton. Selected solo and group shows include those at Herbert Read Gallery, Canterbury; James Hockey and Farnham Galleries, Farnham UK; Kunstmuseum, Linz; Site Gallery, Sheffield; Århus Kunstbygning, Centre for Contemporary Art; 7th Werkleitz Biennale, Halle; Kunsthalle Budapest; Kunstverein Vienna; Sharjah International Biennial 6; Video Positive 2000, Tate Gallery Liverpool; Performing Bodies, Tate Modern, London.
Website: monikaoechsler.com

MÜGE YILDIZ (b. 1985, Agri; lives and works in Istanbul) studied Cinema (BA) at the Faculty of Communication, Galatasaray University and at Paris III Sorbonne Nouvelle; and currently studies Philosophy (MA) at the Institute for Social Sciences, Galatasaray University. She is interested in experimental film and video making, super 8 and other medium. Her work currently focuses on image as concept (from Gilles Deleuze’s L’image-mouvement and L’image-temps). She also writes articles on cinema in several art magazines and has participated in group exhibitions at institutions including Istanbul Modern and Pera Museum.

The joint winners of the Swedenborg Film Festival, November 2016, as selected by guest judge Andrew Kötting, are: 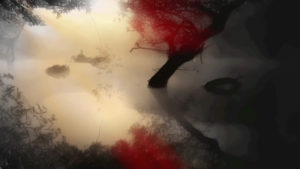 A dark mass lies ahead, in nature. This nature, we do not know if she is dying or if she is overkill. An old priest observes this strange mass closely and decides to undertake a long journey. But is this really an escape? 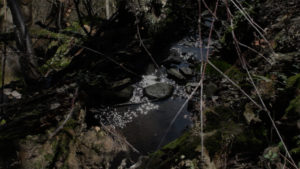 Enter a landscape of curious subtle enchantment, where sentient shadows brood and magic shines resplendent in streams of illuminated water. The Toby Tatum Guide to Grottoes & Groves was filmed over several months during repeated visits to the woodlands near the artist’s Hastings home. The film represents his deepest engagement with nature and its hidden mysteries. It features an original soundtrack by British Sea Power’s Abi Fry.

Guest judge Andrew Kötting’s comments:  ‘I really enjoyed this work—animistic and phantomic—hidden presences and trace elements—voices coaxed out the frame by very subtle light and shadow play. I kept wanting “Verushka” to appear within the landscape; and as part of a large projection/expanded cinematic experience the work has enormous potential’. 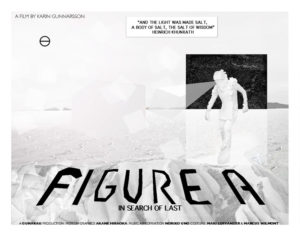 Figure A is a short animated artist film based on footage captured during an artist residency in Cappadocia, Turkey. The artist-director poetically experiments with modularity, symmetry and rhythm through an imaginative network of references to mineralogy, alchemy, Pythagoras and the fugues of J S Bach and the Turkishmaqam. In this work, an interplanetary explorer crash-lands on a barren planet where it confidently familiarizes itself with the surroundings. Through analytical powers, the visitor learns to appropriate the environment and its cultural remnants, using them to transform and transport towards new horizons.

Guest judge Andrew Kötting’s comments: ‘Wonderfully ambitious and futuristic—I was transfixed despite my strange aversion to high-end FX graphics and CGI—but when the magic carpet kicked in the work soared; I was reminded of Jem Finer and Ansuman Biswas’s Zero Genie, which is a very good thing indeed’.

You can view the trailer for Figure A below. 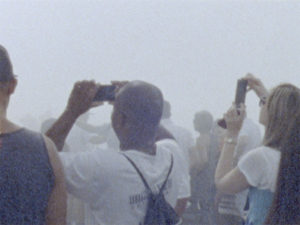 ‘They gather here every day. They come from afar and without purpose. They do not know one other and they will not come to know each other. They carry their gadgets to optimize the experience. They engage with the world through a small frame. They believe that this moment will remain unforgotten.’

Guest judge Andrew Kötting’s comments: ‘Hypnotic and confusing—why have these people gathered and what are they doing? What are they looking at? Where is the smoke machine? Why did Bernd have his super 8 camera to hand? And it’s all driven by the remarkable music of Guido Mobius—It reminded me in its power to bewitch of Ben Rivers’s The Coming Race, which I adore’.