THE WORLDS IN SPACE

Along with the other titles published in 1758, The Worlds in Space consists largely of reworked extracts from Arcana Caelestia, and was intended as a pointer towards that larger work. It is, perhaps, the most controversial of Swedenborg’s books, and one that even Swedenborg’s followers have struggled to embrace. Swedenborg asserts that there is life elsewhere in the universe, even within our solar system, and that this life is intelligent and human too. He meets the spirits of the dead of these planets, learning how they lived and what they believe. His encounters lead him to reflect on how humans on Earth live and how in successive ages we have moved further and further away from the spiritual to the corporeal side of things. The book still serves as an excellent introduction to Swedenborg as he often uses his adventures as a launching point to explain simply and concisely the workings of the world of spirits, heaven and hell, and the theology he has derived from his otherworldly travels. This translation has also been reprinted, with a new foreword by Dr Raymond Moody, as Life on Other Planets.

This edition includes a List of Scripture References and an Index of Subject. Translation of De Telluribus (1758).

With a translator’s introduction by John Chadwick. 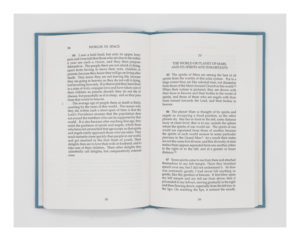 Be the first to review “THE WORLDS IN SPACE” Cancel reply