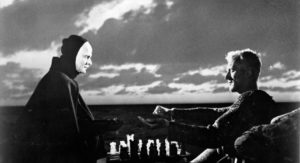 The Seventh Seal is Bergman’s most famous film, and a seminal event in the history of 20th-century cinema. Max von Sydow stars as a 14th-century knight named Antonius Block, heading home to Sweden after fighting in the Crusades.

Disillusioned by the misery he has experienced Block concludes that God does not exist, but as he nears home he is visited by Death (Bengt Ekerot), dressed in the traditional black robe. Unwilling to give up the ghost, Block challenges Death to a game of chess. If he wins, he lives—if not, he’ll allow Death to claim him.

The Seventh Seal ends with one of the most indelible of all of Bergman’s cinematic images: the near-silhouette ‘Dance of Death’. Filmed in Black and white The Seventh Seal has since won multitude of awards, including the Special Jury Prize at the 1957 Cannes Film Festival.

NOW FULLY BOOKED. Doors open at 6.30 for a 7 pm start. Admission is free but capacity is limited. 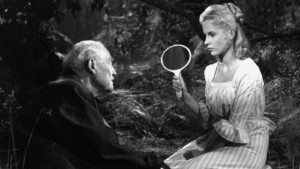 Wild Strawberries is the film that propelled Bergman to the forefront of world cinema. It is also generally considered to be one of his richest and most humane films, and won him an academy award for Best Foreign Film.

Wild Strawberries tells the tale of Professor Isak Borg (played by the veteran Swedish director Victor Sjöström), who is forced to face his past, come to terms with his faults, and accept the inevitability of his approaching death.

Shot in black and white, Wild Strawberries mingles imaginary from everyday life with flashbacks, fantasies, dreams and nightmares. In the final scenes the professor retires to bed one evening and is overcome by a sense of peace and dreams of a family picnic by a lake.

Doors open at 6.30 for a 7 pm start. Please contact nora@swedenborg.org.uk regarding availability. 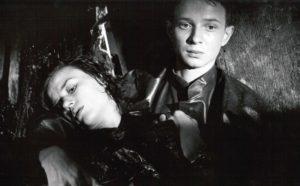 Through a Glass Darkly is a chamber film in three acts. The title is from a biblical passage (1 Corinthians 13) and relates the tale of four family members who act as mirrors for each other. It was the first of many Bergman films to be shot on the island of Fårö.

The story is set during a period of 24 hours, and shows the fragile ties between between Karin (Harriet Andersson) and her father (Gunnar Björnstrand) who has been using her schizophrenia as source material for his own literary ends. As Karin drifts in and out of lucidity, her father along with her husband (Max von Sydow, who is present in all three films) and her younger brother (Lars Passgård) are unable to prevent Karin’s slow descent into mental illness. Through a Glass Darkly won Academy Award for Best Foreign Language Film and is also shot in black and white.