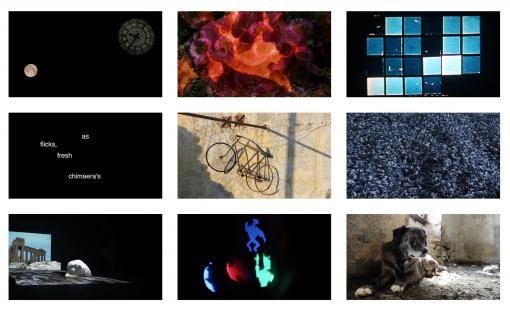 about the guest judge

Bridget Smith (b. 1966, Essex) works within the documentary genre but she photographs places of fantasy and escapism. Smith is interested in the places where people go to seek refuge from the outside world: to escape boredom, to be diverted, transported, absorbed—places to lose oneself, where pretence and reality are often confused. Smith’s photographs have documented the construction of fantasy and the architecture of entertainment, the function of which is to disconnect people from their everyday lives and concerns. Since 2005 her practice has expanded to include both still and moving images which address our struggle to feel connected: within society, the landscape and the wider universe. The photographs and videos often point to the gap between one’s imagination and reality and the interplay between the two. The work flits between objectivity and subjectivity, the real and the fake. Current and recent exhibitions include: The Eye Needs A Horizon, a solo exhibition at Frith Street Gallery (running to 3 March 2016); Relativity, a film commission for Thirteen Ways and The Space in partnership with Forward Arts Foundation and the BBC (2015); and If You Want To Talk About Light You Have To Take About Waves, a solo exhibition at Focal Point Gallery, Southend-on-Sea (2015). Smith is also Artist in Residence at the Swedenborg Society 2015-16.

Thomas Ballhausen is a Viennese writer. He received a Ph.D. in Philosophy from the Academy of  Fine Arts Vienna and teaches Comparative Literature and Film History. He works internationally as an editor, lecturer and curator.

Chris Boyd is a British contemporary artist whose multimedia work is preoccupied with the interrelationships with technology and modes of being. Boyd has shown work at galleries, events and venues, including Tate Online, FACT, Baltic Centre for Contemporary Art, The Lowry, Roundhouse, Urbis, Corsica Studios and The Bigger Picture with The Cornerhouse. A broad spectrum of Boyd’s visual art and commercial work has been broadcast including on music video channels, MTV, 4 Music, BBC 2, Channel 4 and Channel 5.

The Betschart Bros (Ryan, b. 1985; Tyler, b. 1988) have been making lo-fi video and film works for over 15 years. They have been described as ‘The sexiest experimental brother duo since George and Mike Kuchar’. Throughout their career Ryan and Tyler have made hundreds of video and film pieces, each born out of necessity: 1. desire to play. 2. desire to self-express. Only through the collision of image and sound do the brothers Betschart feel at peace with their hearts and with their heads. Both Ryan and Tyler hold BA degrees in Visual Arts from the University of California, San Diego; and graduated with an MFA in Film and Video from Cal Arts in in 2013 and 2015 respectively. Both brothers are freelance teachers, editors, writers, video makers and sound workers. Their work has been shown in various museum galleries and film festivals around the world.

Stewart Collinson is an artist making moving image work for single-screen viewing, gallery installation and live mixing and projection of film, video and digital imagery for performance. An MA in Fine Art, he has worked collaboratively with composers and musicians in a range of contexts, including for Sonic Arts Network (now Sound & Music), Huddersfield Contemporary Music Festival, European Bridges Ensemble. He is currently senior lecturer in moving image at the School of Film & Media, University of Lincoln, UK.

Gillian Duffy is a Dublin-born artist who lives and works in South-East London. She graduated from Camberwell College of Arts in 2007 with a degree in Sculpture. Her practice is concerned with creating catalysts for the imagination and she makes work in a variety of media including sculpture, installation, drawing, video and print. Her work adopts a playful low-fi aesthetic and routinely references science fiction TV, film and literature.

Selini Halvadaki (b. 1985) is a visual artist working in the field of film and video. Her research-­based work explores how cultural narratives are produced through the production of private and collective memory. She often works within a historical context of found footage mixed with new recordings in which moving images becomes a tool to initiate critical questions on social and political topics. Selini has presented her artworks at venues such as CPH:DOX (DK), FOKUS video art festival (DK), EXTRACT Young Art Prize (DK), South East European Film festival (USA), The Danish National Art Library (DK) and Athens International Short Film Festival (GR). Selini Graduated from The Royal Danish Academy of Fine Arts in Copenhagen in 2014. She lives and works in Copenhagen.

Matt Hulse (b. Oxford, 1968) is an artist, filmmaker and writer based in Beijing. His films have screened in more than 25 countries. He has twice been nominated for both The Jarman Award and The Margaret Tait Award. His second feature film Dummy Jim (2013) premiered at Rotterdam International Film Festival and was nominated for the Michael Powell Award for Best British Film at Edinburgh International Film Festival. His new book—I Cycled Into The Arctic Circle: A Peregrination—is published by Matt Hulse Books and The Saltire Society. He also leads tours to the DPRK (North Korea) for Koryo Tours.

Christine Lucy Latimer is an experimental filmmaker and photographer. Her work in the past decade has been featured across 5 continents in more than 200 film festivals and gallery exhibitions. She currently lives and works in Toronto, Canada.

Susan MacWilliam (b. Belfast, 1969) represented Northern Ireland at the 2009 Venice Biennale. Susan’s work explores obscure and overlooked histories and considers perceptual phenomena and the worlds of the paranormal and supersensory. With an interest in that which is on the periphery of the mainstream and falling beyond conventional fields of science and psychology, she has explored phenomena such as dermo-optical perception, table tilting, X-ray vision, ectoplasm and extrasensory perception. Susan is a lecturer in Fine Art at the National College of Art and Design, Dublin. Her video works are held in the British Library Sound Archive.

James Norton began his career as an assistant on feature films by Derek Jarman, Terence Davies and Sally Potter before working for many years as a researcher on television arts programmes such as the Arena strand. He was also a regular contributor of articles on cinema to Vertigo magazine. He has recently directed several profiles of artists in The South Bank Show series as well as short films for the London College of Fashion and NT Live. His work has also been shown at the V&A Museum and the Venice Biennale.

Elena Peytchinska is a Vienna-based visual artist. She graduated from the University of Applied Arts, Vienna in 2007 where she is currently a lecturer in the Stage and Set Design Department. She is winner of the European Artists Book’s Competition in 2011 and received second prize in the artist competition Images of Science in 2009 with the project de-Kant-struction which reflects Kant’s perception of Swedenborg’s ideas. She has also exhibited internationally.

Daphne Rosenthal (b. 1979) is a visual artist mainly working in the field of experimental film, sculpture and animation. In 2008 she received her BFA at the Gerrit Rietveld Academie. She has shown her work in galleries, festivals and museums throughout Europe and the US such as the Wende Museum, Culver City; Museo Universitario del Chopo, Mexico City; Mediamatic, Amsterdam; Quartier 21, Vienna; Heden, Den Haag. She has worked as an editor for filmmakers such as Louis van Gasteren and Peter Greenaway. Her documentary Het Rietveld Schröderhuis (2009) was part of exhibitions at the Tate Modern, London; the Centre Pompidou, Paris; the Vitra Design Museum, Rhein Am Weil. Her work deals with sensory seduction and how we are coded to project our beliefs and longings onto textured moving shapes. She currently lives in Amsterdam and has strong ties with Los Angeles where she has received MFA (2014) in Experimental Animation at Calarts.

Edwin Rostron grew up in the North East of England and currently lives in London. He studied Fine Art at Sheffield Hallam University and Animation at the Royal College of Art. His drawings and animated films have been shown in exhibitions and film festivals around the world. Edwin also runs Edge of Frame, a space for writing and discussion on international experimental animation practice.

Guli Silberstein (b. Israel, 1969) has been based in London since 2010. He studied film and media arts in Tel Aviv and New York. For the past 13 years, his work has been shown in festivals and art venues in the UK and worldwide. Last October, his film Cut Out won best experimental film award at 15th Un Festival C’est Trop Court, Nice, France.

Dr Andrea Szigetvári is an electroacoustic music composer. Her creative and research interests are timbre in new music, interactive performance, and synchresis in audiovisual art. She studied in Warsaw and then as a Fulbright scholar in the USA, returning to Hungary to set up the Hungarian Computer Music Foundation. In addition to composing, she lectures on computer music composition and has organized international new music festivals, conferences and pan-European projects. She won Prizes at the Bourges Electroacoustic Competition in both Sound Art and Multimedia categories in 2001. She holds a doctorate degree (DLA) in composition completed at the Liszt Ferenc Academy of Music, Budapest.

The joint winners of the Swedenborg Film Festival are:

The judges also gave special mentions to Phil Coy for Who Goes There? and to Stewart Collinson & Andrea Szigetvari for Transitus Angeli. 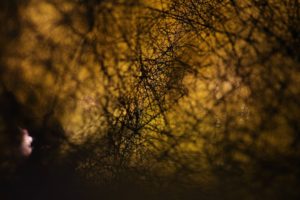 Meanwhile, looking elsewhere presents elementary sensations such as falling, rolling, pressing, trembling and tingling. The materials act along the lines of their characteristics. Their movements resonate in our bodies as we perceive them. The camera digs like a mole in messy and strange, yet familiar worlds. For more about Daphne’s work, please visit here. 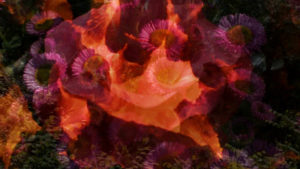 A vision in a dream. Follow a stream of consciousness deep into a world transformed by the shaping spirit of imagination. View the trailer for Mental Space here. 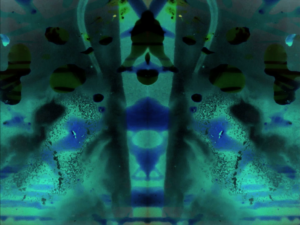 Transitus Angeli is located within the stream of audio-vision/film-work that has sought alternatives to realistic visual representation and figuration, but acknowledges that abstraction in both the visual and sonic domains cannot be separated from the world from which it emerges. Ironically titled, this piece of ‘sonic cinema’, or ‘sonikinos’ is an oppositional response to current growing economic, social and political turbulence and resulting reactionary tendencies. Through systematic distortion and deconstruction, a synthesized bell-sound becomes transformed into a rough-music, charivari, scampanate, or katzenmusik, whilst being articulated and reinforced visually, synchretically, and synaesthetically by the agitated jitter of a visual field derived from digitized looped and sequenced hand-painted 16 mm film. You can view excerpts of Transitus Angeli here.

Phil Coy, Who Goes There? 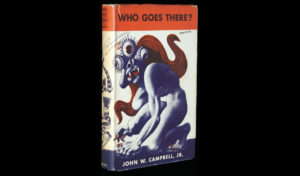 With Who Goes There?, Phil Coy, who often works with the effects of translating one form of representation to another, explores the most ubiquitous of all cultural cover versions – the film adaptation. Reading almost like a psychological test of perception Who Goes There? is a montage of classic covers for novels adapted into screenplays. Flashing past at the rate of one cover per frame, the stream of graphic illustration is tempered by the voice of Karolin Meunier, whose hypnotic delivery describes the conditions of the famous physiological test ‘the troop effect’ – conceived to demonstrate how the left and right sides of the brain separate language and colour. For more on Phil Coy’s work click here.