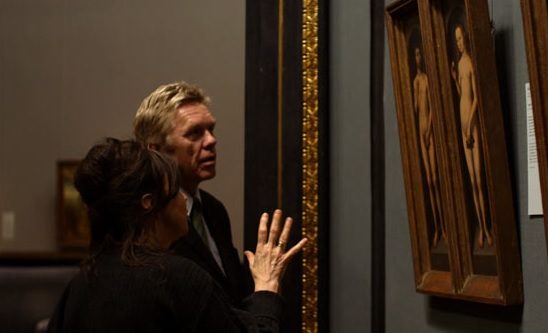 Chloe Aridjis presents a special screening of Museum Hours by Jem Cohen, accompanied by a reading from her novel, Asunder, set in London’s National Gallery. Aridjis is Writer in Residence at Swedenborg House and guest judge of the Swedenborg Film Festival 2019. This year’s Festival presents three nights of visionary film and readings, taking place in Grade II-listed Swedenborg Hall.

MUSEUM HOURS (Jem Cohen), USA, 2012, 107 minutes. ‘A mesmerizing tale of two adrift strangers who find refuge in Vienna’s grand Kunsthistorisches Art Museum: Johann, a museum guard, spends his days silently observing both the art and the visitors. Anne, suddenly called to Vienna from overseas, has been wandering the city in a state of limbo. A chance meeting sparks a deepening connection that draws them through the halls of the museum and the streets of the city. Exquisitely photographed, Museum Hours is an ode to the bonds of friendship, an exploration of an unseen Vienna, and the power of art to both mirror and alter our lives’. (Cinema Guild)

CHLOE ARIDJIS is a London-based novelist and writer. Her most recent novel, Sea Monsters, was published in 2019 by Chatto & Windus, and was described by The Guardian as ‘precise, strange, evocative and wise’.  Her 2009 novel Book of Clouds was published in eight countries and was awarded the French Prix du Premier Roman Étranger. Her 2014 novel Asunder was described by The Independent as ‘rapturous and enraptured reading’. Chloe’s work features enchanting fantastical themes, from the mysterious troupe of Ukrainian dwarves the protagonist of Sea Monsters follows to Zipolite, Mexico to the miniature eggshell landscapes populated with moths in Asunder. These dreamlike worlds evoke some of the stranger, more surreal aspects of Swedenborg’s work. Chloe has undertaken the Swedenborg Residency for 2019-2020, which will involve a series of events and publications.

invites entries from the latest emerging and established talent of experimental and artistic film. For the 2019 submission period, filmmakers were invited to submit new films of 20 minutes or less that explored the concept of ‘Use and Purpose’. Last year’s SFF was guest judged by the late multimedia artist Susan Hiller, and artists and writers including Ali Smith, Andrew Kötting, Jeremy Millar, Bridget Smith and Lech Majewski have judged and shown work at SFF.