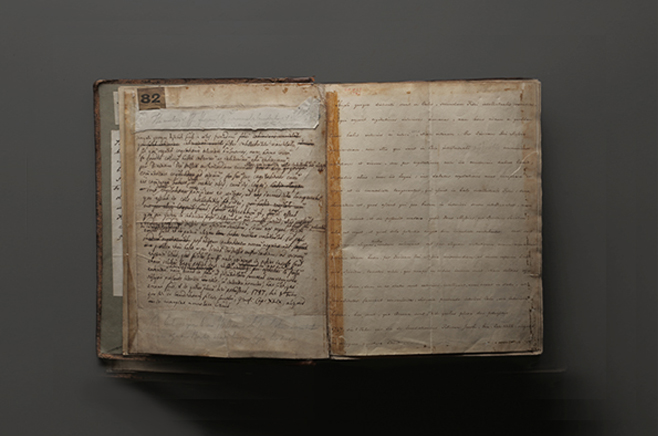 In anticipation of a forthcoming publication on the Swedenborg Collection entitled The Story of Swedenborg in 99 Objects, Museum Director and Editor Stephen McNeilly introduces a selection of 13 highlights, including artworks by William Blake, relics from the body of Swedenborg and rare letters involving the British Government.  The first 6, related to Swedenborg’s personal effects, are described below. Photographs by Oliver Chanarin. 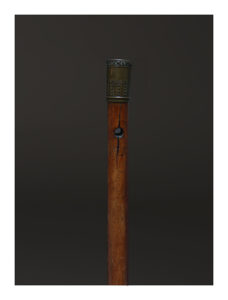 SWEDENBORG VISITED London on at least 7 different occasions, often staying for several years. On his final visit in 1771 he lodged at the house of his friend the wig maker Richard Shearsmith in Clerkenwell, where he died aged 81. Most of Swedenborg’s personal effects were returned to his family in Sweden, but several items remained including this copper tipped malacca walking stick which Swedenborg carried on his strolls through the capital. Shearsmith tells us that Swedenborg often attended dinners and social events and could be seen dressed in a full-bottomed wig, a pair of long-ruffles and a hilted sword.

The fashion for walking sticks was introduced by Louis XIII with the preferred style being the ‘knob’ or ‘Tau’ handle, which would often display extravagant designs including precious stones and jewels. Swedenborg’s walking stick, in contrast, is quite modest, the one sign of luxury being the initials ‘E.S.’ engraved at the top. In his Rise and Progress of the New Jerusalem Church, Robert Hindmarsh (an early follower and founding member of the organized New Church) wrotes that the walking stick was purchased from Shearsmith by the Revd S Dean of Manchester, before findings its way via Hindmarsh into the Swedenborg House collection. Swedenborg House has two other walking sticks that are thought to have been owned by Swedenborg but their provenance is uncertain.

“The fashion for walking sticks was introduced by Louis XIII with the preferred style being the ‘knob’ or ‘Tau’ handle, which would often display extravagant designs including precious stones and jewels.” 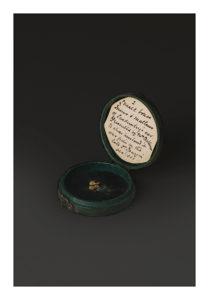 PERHAPS AMONG the strangest items in the Swedenborg collection, the incus and malleus are the smallest bones in the human body and make up the inner ear. They work by picking up small vibrations and are therefore of special interest to students of Swedenborg in that he once wrote in an essay called On Tremulation in which he proposed the possibility of telepathy by means of thought vibrations.  William White, an early biographer of Swedenborg, writes that they were  collected from Swedenborg’s tomb from the vault of the Swedish Church in Princes Square, East London in 1790. The culprit was Dr Spurgin—friend of Keats and former Chair of the Swedenborg Society.

A minute from an 1881 Committee meeting at Swedenborg House notes: ‘on the table a walking stick which once belonged to Swedenborg and also an ear bone (in a case) originally in the possession of Dr Spurgin—both articles presented to the Society by Mrs Bateman’. Mrs Bateman was the widow of Henry Bateman (1806-80), the founder of New Church College, Islington.

“The earbones were  collected on one of two occasions in 1790 when Swedenborg’s tomb was opened in the vault of the Swedish Church in Princes Square, East London.”

3. Fragment from the Spiritual Diary 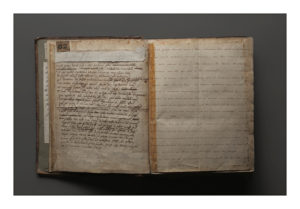 BETWEEN 1747 AND 1765 Swedenborg kept a ledger or diary of his spiritual experiences. Although intended for private use only, these records have since been translated and printed into English, in 5 volumes, as The Spiritual Diary and are among the most original documents ever published. The majority of these handwritten manuscripts are kept at the Swedish Academy of Sciences in Stockholm but a notebook containing some of the very first entries was lost.

“One day I opened The Spiritual Diary of Swedenborg, which I had not taken down for twenty years, and found all there”. W B Yeats

The sheet shown here—glued to the verso side of a frontispiece portrait of Swedenborg in the first English translation of Swedenborg’s Heaven and Hell—is a fragment from that notebook. Written in 1747, it refers to the spiritual significance of Gad and Asher, 2 of the 12 sons of Jacob, as described at chapter 49 of Genesis. At the bottom of the sheet, dated February 8 1757, Swedenborg notes: ‘on this day it was permitted me to note in the margin something concerning the blessings of the sons of Jacob, Genesis XLIX’. Before finding its way into the care of the Swedenborg Society, it was held by the Bath New Church where William Harbutt, made famous as the inventor of plasticine, published a small pamphlet on it. Because of this it is often referred to as the ‘Bath Fragment’. 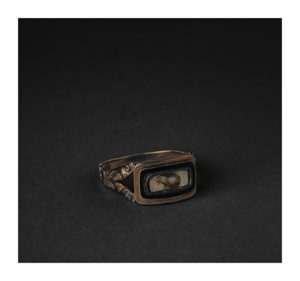 RICHARD SHEARSMITH, a professional wigmaker, once described Swedenborg’s hair as ‘approaching a pale auburn’ but for most of the time—at least in company—it was covered with a white peruke ‘as was the custom of the time’. Another description—given late in Swedenborg’s life—describes it as ‘grey’, and ‘protruding in all directions from under his wig’. The Swedenborg Collection has three samples, with the one shown here placed inside a small ring.  The provenance of cuttings is uncertain although it is most likely they were taken from Swedenborg’s coffin when it was opened in 1790, at the same time as the ear bones were taken. A third was collected by Swedenborg’s close friend and confidant, Dr Messiter, and via a circuitous route, found its way into the Swedenborg collection in 1907 from the granddaughter of C A Tulk. 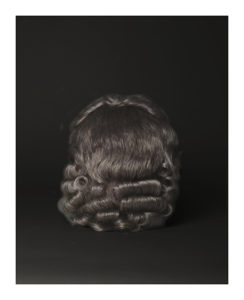 “There is no image of Swedenborg without a wig, and from those portraits taken from life we see him depicted in a simple wig with short pigtail.”

Accompanying these cuttings is a replica wig made in the style worn by Swedenborg. The wearing of wigs first came into high fashion in the seventeenth century via King Louis XIV of France who experienced hair loss at the early age of 17 and his English cousin, King Charles II, whose hair began to prematurely grey: both conditions were signs of the onset of syphilis. During the eighteenth century however wigs were worn by nearly all of the aristocracy across Europe with expensive wigs being been made from a mixture human and horse hair, and powdered with starch, rice powder and plaster of paris to protect against small insects. There is no image of Swedenborg without a wig, and from those portraits taken from life we see him depicted with a simple wig with short pigtail. Women did not wear wigs until around 1770.

THE FIFTH item in this list is a fragment of parchment that, in the normal course of daily life, would have been used as kindling or thrown away. It was most likely caught between manuscript pages and discovered at a later date by happy accident. Made from a mixture of linen and cotton (paper made from wood pulp had yet to be invented), it would have been used by Swedenborg to gently absorb the occasional overflow of ink from his pen. 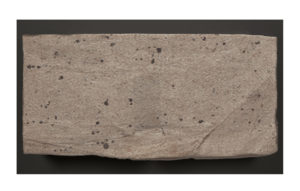 Given that Swedenborg wrote thousands upon thousands of manuscript pages, by hand and with a duck quill pen, it is surprising that more has not been said on his writing methods. Due to the sheer volume of material it was once suggested that he may have been ambidextrous but a close study of his manuscripts shows that this is almost certainly not true. Instead we see a neat style reserved for ‘fair copies’ (i.e. intended for the printers or for letter writing) and a rushed and uneven style reserved for topics of personal use. Both display a ‘right hand’ slant.

This small fragment of blotting paper was donated to the Swedenborg Society by Robert J Tilson (1857-1942), a former bishop in the General Church of the New Jerusalem and highlights the ephemeral and accidental nature of the Swedenborg collection.

“Given that Swedenborg wrote thousands upon thousands of manuscript pages, by hand and with a duck quill pen, it is surprising that more has not been said on his writing methods.” 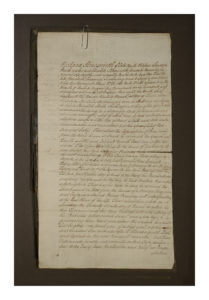 SWEDENBORG PASSED away peacefully on March 29th 1772, aged 81, at 4pm at the home of his friend and landlord Richard Shearsmith at no. 26 Cold bath Fields. Signed and witnessed in the presence of Robert Hindmarsh and a Mr. Thomas Wright, Lord Mayor of London, this remarkable affidavit is a testimony of that event.

Shearsmith’s affidavit is important for several reasons. Firstly, it offers a rare and intimate portrait of Swedenborg’s living habits and final months in London, including the effects of a stroke and the moment of his passing. Secondly, it independently corresponds with John Wesley’s note that Swedenborg had anticipated the exact date and time of his final hour.

Shortly after Swedenborg’s death, a rumour was spread by a Revd Matthesius that Swedenborg had recanted and retracted his theological works. Robert Hindmarsh called upon Shearsmith in Cold Bath Fields to gain verification. The foreign clergyman mentioned, who ministered his last rights, was the Revd Ferelius, curate at the Swedish Church in Wapping where Swedenborg was interred. The affidavit was drafted by Hindmarsh. Mrs Shearsmith, unable to write,  signed it with a ‘+’.

“Shearsmith’s affidavit is important because it offers a rare and intimate portrait of Swedenborg’s final months in London, including the moment of his passing.”

words and images © The Swedenborg Society, 2021